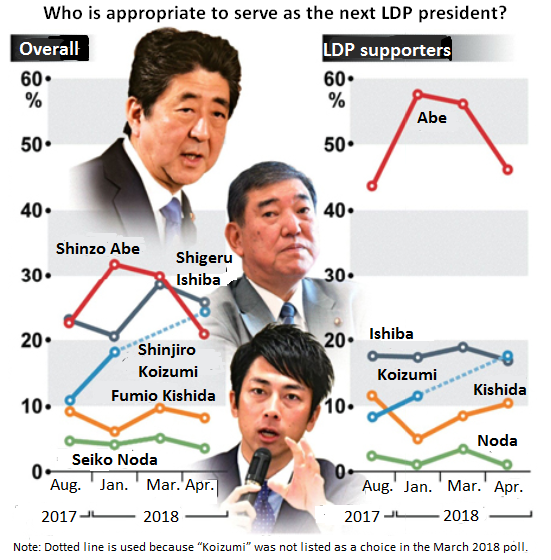 In the opinion poll jointly conducted by the Sankei Shimbun and Fuji News Network (FNN) on April 21–22, pollees were asked who they think would be most appropriate as the next Liberal Democratic Party (LDP) president. Former LDP Secretary-General Shigeru Ishiba regained the top position, garnering the backing of 25.7% of respondents. LDP Chief Deputy Secretary-General Shinjiro Koizumi was second at 24.4%, while Prime Minister Shinzo Abe (current LDP president) was third at 20.9%, falling from the top position he earned in the previous poll conducted in March. The LDP will hold its party presidential election in September this year.

The Prime Minister fell behind Ishiba in the recent poll, as Abe’s support dropped by 9.1 percentage points while Ishiba’s only declined by 2.9 points. The document falsification scandal as well as the sexual harassment scandal involving the Finance Ministry are thought to have impacted the results of the poll.  LDP Policy Research Council Chairman Fumio Kishida was fourth at 8.2%, and Minister for Internal Affairs and Communications Seiko Noda followed at 3.5%.

Among LDP supporters, however, Shinzo Abe held on to the top position, backed by 46.1%. This marks a drop of 10.1 points but is still notably above Koizumi’s 17.2% and Ishiba’s 16.9%. This suggests Abe still enjoys strong support [in his party]. With an eye to competing with the Ishiba faction (Suigetsukai), which is led by Shigeru Ishiba and attracted over 1,000 people at a fund-raising party held in Osaka City in February, Prime Minister Abe found time amid his busy public schedule to attend the meeting of the Federation of Osaka Prefecture LDP Branches on April 13. Although the findings for LDP supporters in this poll do not directly relate to party member votes in the party presidential election, it looks like the competition for LDP member votes will heat up as candidates seek to expand support.

In the recent poll, Koizumi was most favored as the next LDP president among independents at 30.4%. Ishiba was a close second at 30.1%. Only 6.3% of independents said they want Abe to continue as president. Ishiba gained the overwhelming support of opposition party supporters, with 41.7% of Democratic Party supporters and 37.7% of Constitutional Democratic Party of Japan supporters saying they want him to be the next LDP president.

[Polling methodology: The survey was conducted until the calculated number of responses was obtained by placing telephone calls on a random digit dialing (RDD) basis adjusted to the gender and age composition of each survey area. A total of 1,000 men and women, aged 18 and over, across the nation were surveyed. The survey was conducted on April 21–22.]