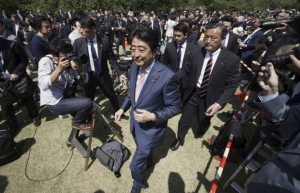 The nation’s press freedom ranking in 2018 slightly increased from the previous year, primarily the result of worsening conditions in other democracies, Reporters Without Borders said Wednesday.

The international watchdog group, which measures the degree of freedom available to journalists in 180 countries, ranked Japan at 67th — up five notches from last year — just behind El Salvador and ahead of Lesotho.

“The better ranking for Japan comes for a big part of the weakening of other democracies in the world and also from the fact that 2018 was relatively calm and that we received fewer alerts from Japan,” said Cedric Alviani, the watchdog’s East Asia bureau director.

The Paris-based organization warned that hatred and hostility toward the media, openly encouraged by political leaders, has not only accelerated under authoritarian regimes, but has expanded to democratic countries where press freedom is traditionally respected.

The U.S. ranked 45th this year, two spots down for two consecutive years under President Donald Trump, and some Eastern European countries such as the Czech Republic and Slovakia saw their rankings plunge 10 places or more due to recent verbal attacks on the media by politicians and acts of violence.

The press freedom index is compiled based on assessments of pluralism, media independence, media environment, self-censorship, legislative framework, transparency and the quality of media infrastructure.

Japan’s ranking has been the worst among the Group of Seven nations for two consecutive years. The main factors that caused its decline from 61 to 72 last year remain stumbling blocks to the nation’s media freedom.

“The government continues to refuse any debate about a law protecting ‘Specially Designated Secrets’ under which whistleblowers, journalists, and bloggers face up to ten years in prison if convicted of publishing information obtained “illegally,” said the Reporters Without Borders spokesman.

Issues with the kisha club system were recently put in the spotlight by a scandal involving a high-ranking finance ministry official alleged to have sexually harassed a female TV Asahi reporter. TV Asahi, which is a member of the Finance Ministry’s kisha club, was accused of declining the reporter’s request to report the incident, with some critics pointing out that officials with the broadcaster were afraid it could hinder the news organization’s access to finance ministry officials.

Among countries in the Asia-Pacific region, South Korea rose more than any other country, jumping 20 places to 43rd thanks to President Moon Jae-in’s resolution of a conflict between journalists and management at the nation’s public broadcasting service.

Norway topped the ranking for the second year running, followed by Sweden in second place and the Netherlands in third. North Korea won the honor of having the lowest ranking — taking the 180th position.