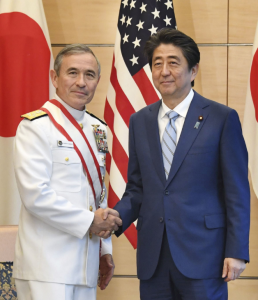 All national dailies wrote that Prime Minister Abe held talks with Admiral Harry Harris, commander of the U.S. Pacific Command, at the Kantei on Thursday. All of the papers wrote that the two officials agreed that the United States and Japan will maintain maximum pressure on North Korea to seek its denuclearization in a complete, verifiable, and irreversible manner and will strengthen their alliance and work together to realize a “free and open Indo-Pacific.” Asahi wrote that the prime minister expressed gratitude for the admiral’s contributions to enhancing the U.S.-Japan alliance. The paper also wrote that the PACOM commander reportedly said it is important to continue to put pressure on the DPRK with the cooperation of not only South Korea but also other allies and friends.