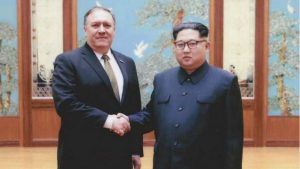 NHK, Fuji TV, and NTV reported that the Senate confirmed CIA Director Pompeo as secretary of state on Thursday. The networks quoted President Trump as saying in a released statement: “Having a patriot of Mike’s immense talent, energy, and intellect leading the Department of State will be an incredible asset for our country at this critical time in history.” The networks said the new secretary is expected to play a leading role in the run-up to the planned U.S.-DPRK summit. They aired photos released by the White House of a meeting between CIA Director Pompeo and North Korean leader Kim Jong Un that reportedly took place in Pyongyang over Easter weekend.