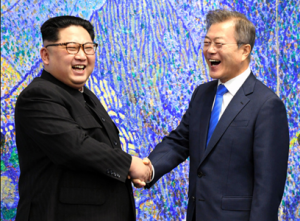 All broadcasters reported that the White House released a comment on the summit between Kim and Moon, quoting Press Secretary Sanders as saying:“We are hopeful that talks will achieve progress toward a future of peace and prosperity for the entire Korean Peninsula. The United States appreciates the close coordination with our ally, the Republic of Korea, and looks forward to continuing robust discussions in preparation for the planned meeting between President Donald J. Trump and Kim Jong Un in the coming weeks.” NHK opined that it is very unusual for the White House to issue a comment on a summit between foreign governments especially before it took place, speculating that this reflects the Trump administration’s keen interest in the discussions between the two Korean leaders.

The network’s Washington correspondent claimed that since North Korea has repeatedly reneged on its previous commitments to denuclearize, some Trump administration officials are very skeptical about Kim’s sudden peace overtures. Washington is paying close attention to what the DPRK leader will say in the summit with Moon about denuclearization since this will be a sign of his degree of serious about the upcoming meeting with President Trump. The journalist added that with the midterm elections in November in mind, the President will probably be eager to come up with a viable road map for the denuclearization of the Korean Peninsula in his meeting with Kim Jong Un. He added that incoming Secretary of State Pompeo is likely to be deeply involved in the preparations for the U.S.-DPRK summit.

TV-Asahi asserted that some USG officials are worried that South Korea is buoyed by the historic nature of the summit and be tempted to make major concessions on such issues as a peace treaty, which could affect the presence of U.S. troops in South Korea. Fuji TV projected that President Trump will hold teleconferences with Prime Minister Abe and other regional leaders over the weekend to share and analyze the takeaways from the Korean summit in preparation for his sit-down with Kim Jong Un.