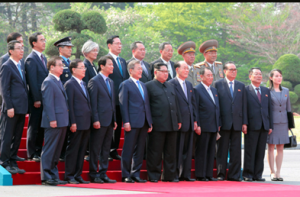 All TV networks reported on Japan’s response to the commencement of the historic inter-Korean summit between President Moon and Kim Jong Un, quoting Chief Cabinet Secretary Suga as telling the press this morning: “Serious discussions will be held between the two Korean leaders, who are accompanied by key officials in charge of politics, diplomacy, and national defense. We are hoping they will hold positive talks toward a comprehensive settlement of the abduction, nuclear, and missile issues.” Foreign Minister Kono said: “I greatly respect South Korea’s efforts to arrange the historic summit…. As we are in constant coordination with South Korea, we will learn about the results without delay.” TV-Asahi predicted that President Moon will probably phone Prime Minister Abe tomorrow to brief him on what was discussed in the meeting with Kim. TBS claimed that the Abe administration’s foremost interest in the Inter-Korean summit is what the DPRK will say about the issue of the abduction of Japanese citizens, which President Moon was supposedly planning to bring up.