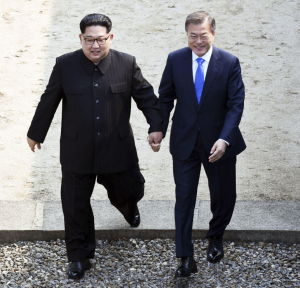 All national dailies on Saturday reported extensively on the inter-Korean summit held at Panmunjom on Friday, during which South Korean President Moon and North Korean leader Kim Jong Un signed a joint “Panmunjom Declaration” that establishes a common goal of realizing, through complete denuclearization, a nuclear-free Korean Peninsula. The two leaders also agreed to strive to bring a formal end to the Korean War. All of the papers wrote that although Moon and Kim agreed on the common goal of pursuing “complete denuclearization,” they failed to present specific measures or a timetable for achieving that goal. Yomiuri wrote that discussions on specifics, such as a deadline for denuclearization, procedures for inspections, and possible economic rewards, have been put off until the U.S.-DPRK summit in June. Mainichi wrote that attention will be focused on whether Washington and Pyongyang will conclude a detailed agreement on denuclearization at their planned summit.

Prime Minister Abe told reporters on Friday that he welcomes the outcome of the inter-Korean summit as a positive move toward the comprehensive resolution of various problems associated with North Korea. The premier reportedly added that he strongly hopes the DPRK will take concrete actions toward denuclearization and that Japan will keep a close eye on future developments. Sankei wrote that in response to a question from a reporter, Abe dismissed concern that Japan will be left behind amid Pyongyang’s diplomatic overtures toward the United States, South Korea, China, and Russia.