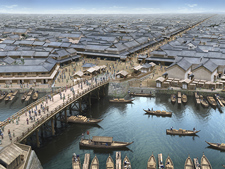 Sunday’s “NHK Special” aired the first part of a new series on Tokyo when it was known as Edo, focusing on how samurai strove to build the city. The program said Edo had developed into the largest city in the world with a population of one million by about 100 years after Tokugawa Ieyasu founded the Edo Bakufu in 1603, saying that samurai  across the nation played an integral role in building the city of waterways. The program said the spiral moats built around Edo Castle, the land reclamation and stone walls, and vast underground waterworks system built by samurai were essential for the development of the city.