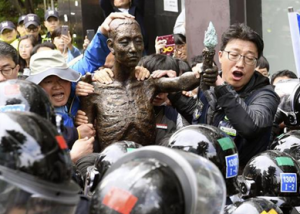 All Tuesday evening papers reported on a scuffle that occurred in front of the Japanese Consulate General in Busan yesterday between riot police and some 100 civic activists and unionists who tried to install a statue in honor of Koreans subjected to forced labor by Japanese companies during WWII. The ROK government had urged the activists not to put up the statue since it would trigger “diplomatic friction.” The local authorities had also asked the organizers not to install it.

According to this morning’s papers, the police were successful in preventing the statue from being erected. Asahi said the fact that the local police blocked the installation contrasts sharply with their previous condoning of the establishment of a comfort women statue in almost the same location in 2016, conjecturing that the Moon administration probably asked the Busan authorities to prohibit the statue’s installation in order to better “manage” bilateral relations with Japan with the ultimate goal of obtaining Tokyo’s cooperation in further improving Seoul’s ties with Pyongyang. The daily added that the GOJ is pleased with the Moon administration’s response because the installation of the statue could have undercut mutual cooperation toward the denuclearization of North Korea.