42% of voters feel the Heisei Era is “tumultuous,” Asahi survey 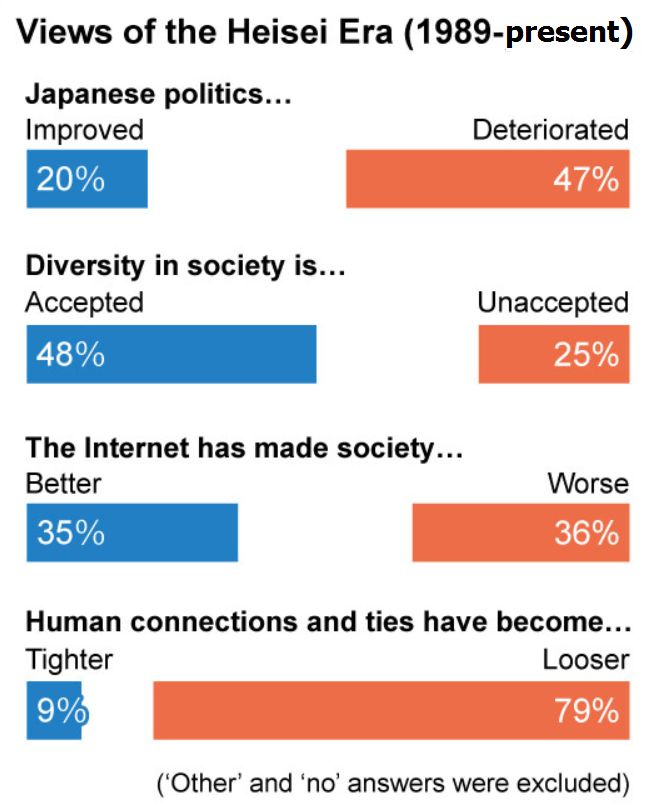 Forty-two percent of voters describe the Heisei Era (1989-present) as “tumultuous,” only 5 percent think it’s been “bright,” and 52 percent picked a natural disaster as the most memorable incident of the period, an Asahi Shimbun survey showed.

The second-largest group, at 29 percent, chose “stagnant” to describe the era, followed by “progressive” at 25 percent, “conservative” at 21 percent, “stable” at 19 percent, “bleak” at 9 percent, and “vibrant” at 6 percent.

The Heisei Era will end next year when Emperor Akihito abdicates the Chrysanthemum Throne and his eldest son, Crown Prince Naruhito, becomes emperor.

The nationwide survey was conducted via mailed questionnaires from mid-March to late April to gauge voters’ views of the era, the Constitution and other perspectives.

Respondents were allowed to choose up to two of eight options for the question: “What kind of era is the Heisei?”

The top two answers were the same as those for the same question in a 2009 survey, which was conducted on voters aged 20 or older. The latest survey included 18- and 19-year-olds, who are now eligible to vote.

Both surveys showed 42 percent picking “tumultuous.” Although “stagnant” remained No. 2, it dropped significantly from 40 percent in the 2009 survey.

“Bleak” came in third in 2009 at 21 percent but plunged out of the top three in the latest survey.

“Bright” was also the least picked option in both surveys to describe the Heisei Era.

The voters were also asked to name the single most memorable incident of the Heisei Era.

Fifty-two percent picked a natural disaster, such as the Great East Japan Earthquake and tsunami that destroyed wide areas of the northeastern Tohoku region on March 11, 2011, and the Great Hanshin Earthquake that rocked the city of Kobe and surrounding areas on Jan. 17, 1995.

Great strides in computer technology have been achieved during the Heisei Era, but have they improved society?

Thirty-five percent of respondents said the Internet has made Japanese society “better,” trailing the 36 percent who said it has made society “worse,” the survey showed.

In terms of real world interactions, 79 percent of respondents said “human connections and ties” during the era have become “looser,” while just 9 percent felt they have “tightened.”

Only 17 percent of voters from the ages of 18 to 29 said human connections and ties have strengthened, according to the survey.