Michael Pompeo sworn in as Secretary of State 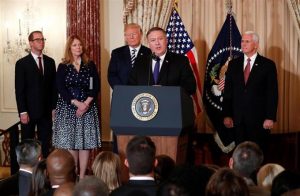 Friday’s Yomiuri, Asahi, and Sankei took up the swearing in ceremony of Michael Pompeo as Secretary of State held at the State Department on Wednesday, noting that President Trump visited the department for the first time to attend the ceremony. In reply to the President’s statement that he has no doubt that Secretary Pompeo will make America proud, the Secretary was quoted as saying: “We will employ tough diplomacy when necessary to put the interests of the American people first…. I will make sure America is always a respected and principled leader on the world stage.” As for North Korea, Secretary Pompeo said: “We are committed to the permanent, verifiable, irreversible dismantling of North Korea’s weapons of mass destruction program.” He called the planned summit between the President and Kim Jong Un an “unprecedented opportunity to change the course of history on the Korean Peninsula.”