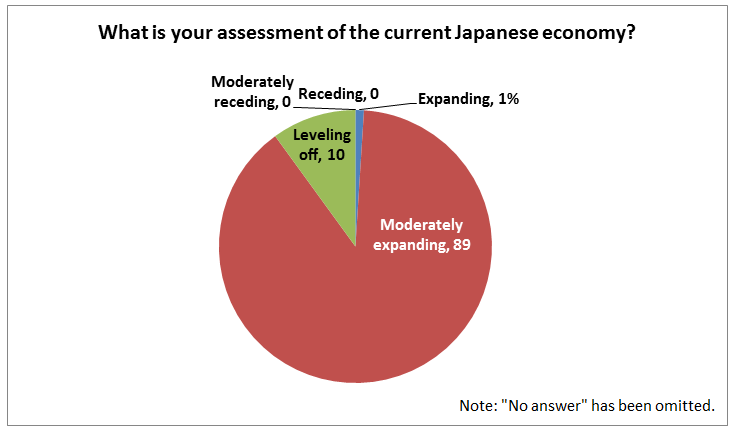 Companies are growing more confident about the economy. According to the Sankei Shimbun’s questionnaire survey taken of 126 major Japanese companies, some 90% of respondents said the current domestic economy is either “expanding” or “expanding moderately.” Corporate profits are at highest-ever levels, and this has led to a rise in business confidence. Moreover, about 80% of pollees said the economy will be “expanding” or “expanding slightly” in the second half of the year. Concerns persist, however, over the labor shortage and the impact of U.S. protectionist trade policies.

Given multiple options and asked to select up to two as reasons for their response that the economy is “expanding” or “expanding moderately,” some 54 companies said “increase in corporate profits,” making it the most frequently given response. Listed companies are expected to post best-ever profits for the period ending March 31, 2018. Other responses were as follows: “improvement in the employment situation” (30 companies), “recovery in the overseas economy” (29 companies), and “recovery in personal consumption” (28 companies). Some 25 companies selected “other,” and many of these said “increase in capital investment” with a rise in their corporate profits.

Some 12 of the companies that thought the economy is leveling off gave as their reason “sluggish personal consumption.”

Given multiple options and asked to select up to two as reasons for their response that the economy will be “expanding” or “expanding moderately” in the second half of the year, some 36 companies said “increase in corporate profits,” making it the most frequently given response once again. Favorable business performance is bolstering economic sentiment. Other responses were as follows: “other” including increase in capital investment (35 companies), “recovery in personal consumption” (30 companies), and “recovery in the overseas economy” (28 companies).

Respondents were asked to write causes for concern about the domestic economy through the end of the year. Many pollees gave responses similar to a construction company which said “trade friction set off by the United States,” which is adopting more protectionist policies. If trade friction heats up between the United States and China, it could have a negative impact on the domestic economy as it will trigger a “slowdown in the world economy and major fluctuations in the exchange rate” because it will place downward pressure on the Chinese economy as exports become sluggish.