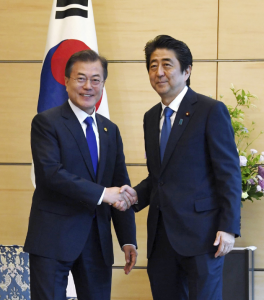 All national dailies reported on bilateral talks held between Prime Minister Abe and South Korean President Moon in Tokyo on Wednesday, during which they agreed that the two nations will build their relationship in a forward-looking manner. Asahi wrote that the two leaders, in view of the North Korea issue, attached importance to cooperation rather than took up history issues between their nations. According to Nikkei, Abe and Moon agreed to promote reciprocal visits to each other’s country.