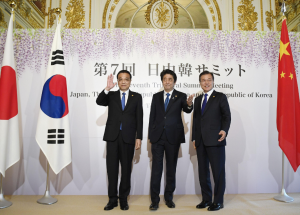 All national dailies reported on the trilateral summit held between Prime Minister Abe, Chinese Premier Li, and South Korean President Moon in Tokyo on Wednesday. The three leaders released a joint declaration stating that they are committed to the complete denuclearization of the Korean Peninsula. Asahi, Nikkei, and Sankei wrote that the three leaders failed to present a clear path toward denuclearization because differences remained between Tokyo, which attaches importance to pressure on Pyongyang, and Beijing and Seoul, which place importance on dialogue. All the papers wrote that the declaration was not released until late in the evening because it took time for the three nations to agree on the language of the document, which in the end did not refer to “complete, verifiable, and irreversible” denuclearization.

The declaration also says the Chinese and South Korean leaders hope that the abduction issue can be resolved through dialogue at an early date. Prime Minister Abe said at a post-summit joint press conference that he had obtained understanding from Li and Moon for his request for cooperation in resolving the issue of Japanese nationals abducted by North Korea.

The three leaders also agreed to promote cooperation on the economic front, including through infrastructure development in East Asia, and to accelerate talks on a trilateral free trade agreement and the Regional Comprehensive Economic Partnership.

Abe, Li, and Moon also agreed to expand people-to-people exchanges through cultural, sports, and other events, as Japan is scheduled to host the 2020 Tokyo Summer Olympic Games and China the 2022 Beijing Winter Games following South Korea’s hosting of the PyeongChang Winter Games in February.

Yomiuri wrote that the first trilateral summit between the leaders of Japan, China, and South Korea in two and a half years demonstrated improvement in Tokyo’s ties with Beijing and Seoul.