Abe welcomes “era of cooperation” between Japan and China 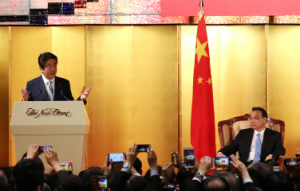 Yomiuri reported on remarks made by Prime Minister Abe at a reception held in Tokyo on Thursday to celebrate the 40th anniversary of the Japan-China Treaty of Peace and Friendship with Chinese Premier Li in attendance. Abe expressed Japan’s readiness to cooperate with China in infrastructure development in Asia by saying that the two nations have entered an era of cooperation.

In a related development, Asahi wrote that Japanese business leaders expressed positive views about the agreement reached between Abe and Li at their summit on Wednesday to strengthen economic cooperation between their nations. The paper wrote that Japanese firms are hoping that the strengthened economic cooperation will help boost their business in third countries under the “One Belt, One Road” initiative.