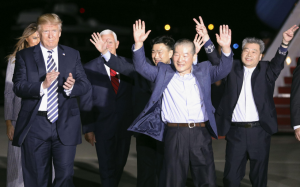 All national dailies reported that the three Americans who had been detained in North Korea arrived in the United States early Thursday morning, a day after their release during Secretary Pompeo’s visit to Pyongyang, and were greeted by President Trump at Andrews Air Force Base outside Washington.