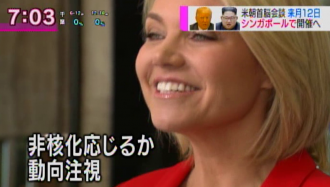 NHK reported this morning on its one its one-on-one interview with DOS spokesperson Nauert, who accompanied Secretary of State Pompeo to Pyongyang. On the upcoming U.S.-DPRK summit, the network showed video of her saying: “We needed a city that has the infrastructure so that you can bring in so many journalists, government officials to pull together a meeting of this size, scope, and importance. Singapore seems to be the perfect location for that.” The network said Nauert pointed out that the U.S. will continue to hold discussions with the DPRK before the summit and said that the U.S. will closely monitor whether North Korea responds to the U.S demand for denuclearization. She was also quoted as saying: “There’s a lot of work left to be done. We are still clear eyed and realistic about what will take place at that meeting.”