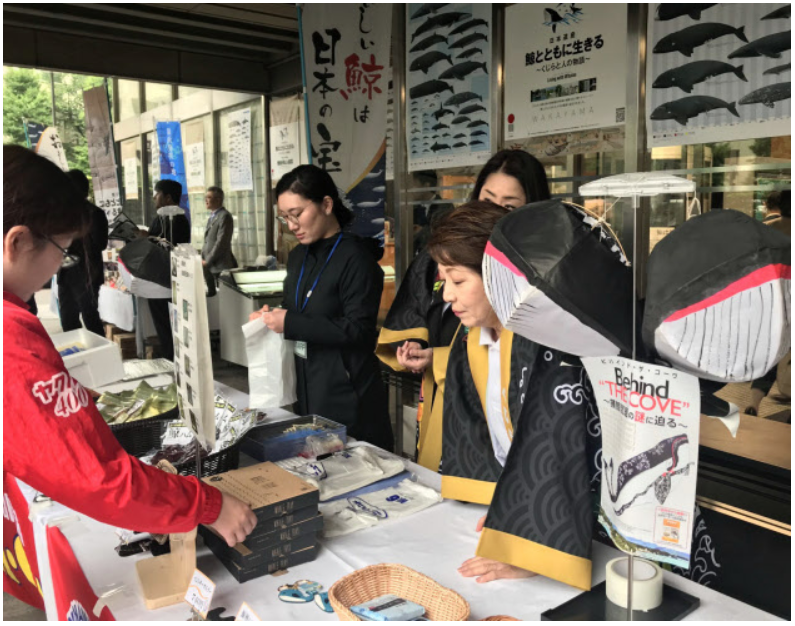 Whale-meat products, including curry and canned goods, were sold at the fair.

Whale used to appear regularly on the Japanese dinner table. Domestic production peaked in 1962 at 226,000 tons but has leveled off in recent years at 2,000 to 3,000 tons. To raise interest in eating whale, a fair titled “Living with whales: An exhibit on whale cuisine and culture” was held for the first time ever at Liberal Democratic Party (LDP) Headquarters on the morning of May 10. Whale-meat soup, whale curry, and deep-fried whale were offered to visitors free of charge and whale meat products from throughout Japan were available for purchase.

“(Until I became an adult) I thought sukiyaki was always made with whale meat,” says Kazutaka Sangen, mayor of Taiji Town in Wakayama Prefecture, an area active in whaling since the 17th century. Local dishes like whale “au vin” were also offered at the fair. “If you catch one large whale, you can make all kinds of dishes,” he says. “Whale-meat sukiyaki is delicious! It’s just as good as the beef version.” Throughout Japan, there are dishes that feature whale meat.

At the fair, whaling guns and a model of a cetacean research vessel were also on display. Videos of whales filmed in the Southern Ocean were also shown. Exhibitors devoted themselves to their PR work to communicate the rich bounty of the sea.

The International Whaling Commission (IWC) will hold its biennial Commission Meeting this autumn. “Whaling is a traditional fishing industry in Japan, and I would like to advance it in a peaceful fashion,” says LDP Secretary-General Toshihiro Nikai.

Behind the decrease in whale consumption is the temporary suspension of commercial whaling under an international agreement. Japan aims to restart commercial whaling, but some people, like Tokyo University of Marine Science and Technology Professor Joji Morishita, are “concerned that interest is on the decline.” Efforts to spur consumption will continue with the aim of stimulating public discussion.