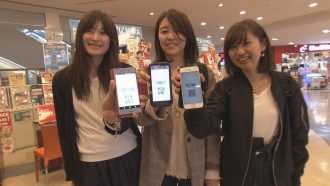 NHK’s “Close-up Gendai+” reported that the cashless revolution in China is spreading to Japan, saying that already many people are using smartphone apps instead of cash to pay at shops and restaurants and many companies are entering the mobile payment market. The program also reported on how Sweden is on the verge of becoming a cashless economy, saying that a growing number of shops there are refusing cash payment and banks are closing down ATMs. The program said while cashless societies may be convenient, they also give rise to security issues.