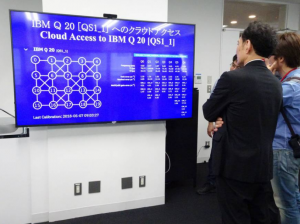 A research hub that can access IBM’s Q quantum computer via the cloud was opened at the Yagami campus of Keio University in Kanagawa Prefecture on Thursday. | KAZUAKI NAGATA

Keio University opened a research hub Thursday that can access IBM Corp.’s cutting-edge quantum computer system through the internet, with the aim of studying the possibilities of harnessing quantum computing.

“Research in software development for quantum computers has barely taken place; there was no real hardware system … We are going to be the first to work on it and that’s the purpose of this research center,” said Naoki Yamamoto, an associate professor at Keio who is an expert in quantum computing.

The new IBM Q Network Hub at the university’s Yagami campus in Kanagawa Prefecture is the first of its kind in Asia. It allows researchers to use the power of IBM Q — the quantum computer at the tech giant’s research center in New York.

Quantum computers could provide the ability to perform much more powerful calculations than supercomputers, and it is often said they will change the face of the industry if they are put into practical use.

But it is not yet clear what kinds of tasks would make the best use of quantum computing, so a primary goal of the Keio research center will be to identify such applications, said Kohei Ito, head of the Faculty of Science and Technology at Keio University, during a news conference at the private university.

Conventional computers work using units called bits. Based on simple principles of electrical circuits, each bit can be either “on” or “off” — taking the value 1 or 0, respectively. But quantum computing uses units known as qubits (quantum bits) that also have a characteristic known as superposition that allows them to hold both of these values at the same time to perform calculations more quickly.

Keio’s new research hub is expected to attract not only students and faculty members, but also private-sector researchers. All are expected to work together to explore the possibilities of working with the 20-qubit IBM Q, said Ito.

IBM chose Keio as its first Asian quantum computing hub as the university has a number of specialists in the field, said Ito, who has been researching the concept for roughly two decades. The other hubs are in the United States, U.K. and Australia.