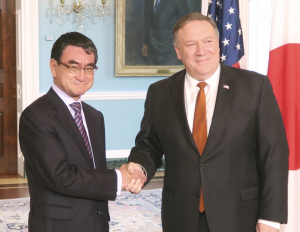 NHK reported that Foreign Minister Kono held talks with Secretary of State Pompeo in Washington on Wednesday, saying that the two officials agreed on the need to persuade North Korea to take concrete actions to completely abolish its weapons of mass destruction and ballistic missiles while maintaining the pressure on the DPRK . The network added that they also exchanged views on the new strategy announced by the United States concerning Iran. According to the broadcaster, Kono also held a separate meeting with National Security Advisor Bolton.

Kono told reporters after his meeting with Secretary  Pompeo: “As President Trump has stated, it will be meaningless to hold a meeting in Singapore unless certain conditions are met. Holding a meeting just for the sake of meeting is not the purpose.  Our ultimate goal is to resolve the issues of North Korea’s nuclear and missile programs and abductions of Japanese nationals.”