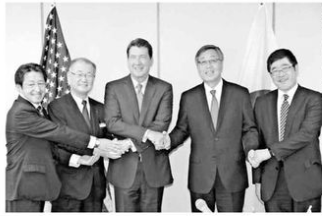 On May 29, U.S. Ambassador to Japan William F. Hagerty met with the executives of Yokohama-based listed companies  with operations in the United States. The meeting took place at the Yokohama Chamber of Commerce and Industry in Naka Ward, Yokohama.

Nice Corporation President Koichiro Hirata as well as the directors and executive officers of NHK Spring, Yorozu, and Fujisoft participated in the gathering. They spoke informally for about 40 minutes about expanding business. The Yokohama Chamber of Commerce and Industry said, “Building good ties with the United States is very important for the economy of the Yokohama region and for companies’ management of their global operations going forward.”