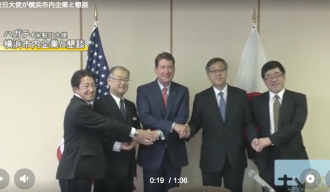 TV Kanagawa reported that Ambassador Hagerty visited the Yokohama Chamber of Commerce and Industry on Tuesday to meet with the representatives of four Yokohama-based companies with factories or subsidiaries in the U.S. and exchange views with them on how to further expand their business operations there. According to the network, the Ambassador expressed appreciation for the fact that Japan’s foreign direct investment in the U.S. has reached a record high and pledged to endeavor to make it easier for Japanese firms to secure sufficient personnel in the U.S. and obtain visas for Japanese engineers. 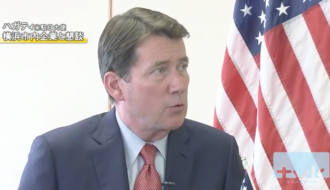 The network showed the Ambassador saying: “We can accelerate the process, make it easier for Japanese companies who are trying to get their professionals to the United States. I am optimistic that we may find some opportunities that would shorten the time and increase the number of people that will be able to obtain visas coming from Japan into the United States.”