Abe searching for next centerpiece policies as he eyes third term 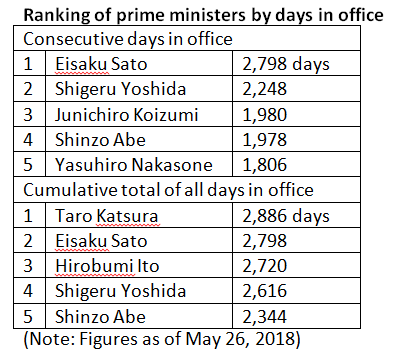 On May 28, Prime Minister Shinzo Abe will mark his 1,980th day in office since the launch of his second cabinet in December 2012. This puts him on a par with former Prime Minister Junichiro Koizumi in consecutive days in office. Abe has served the third highest number of days in office, after former Prime Ministers Eisaku Sato and Shigeru Yoshida, but Abe has been plagued recently by multiple scandals, including [one surrounding a heavily discounted land sale to] school operator Moritomo Gakuen. Setting policy goals that will drive an administration is critical. Prime Minister Abe will define centerpiece policies as he seeks a third term in the Liberal Democratic Party presidential election in September.

There are not yet any clear paths forward for constitutional amendment or ending deflation, two priorities set by Prime Minister Abe.  Although “regional revitalization,” “dynamic engagement of all citizens,” and “productivity revolution” were formulated as centerpiece policies, it is hard to say that they have driven Abe’s administration. Will Abe move forward with just these policies or will he create new ones? Abe is pressed to make a decision with the LDP presidential election coming up. (Abridged)