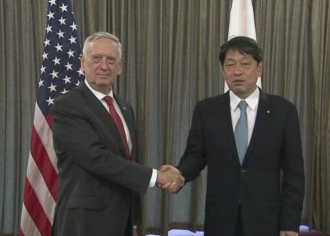 NHK reported at noon on a meeting between Defense Minister Onodera and Secretary of Defense Mattis on Tuesday in Hawaii. The network said the two defense chiefs agreed on the importance of maintaining pressure on North Korea, including monitoring ship-to-ship transfers of cargo, to persuade it to change its policy and completely abolish its weapons of mass destruction and ballistic missiles. In addition, they also reportedly confirmed the importance of U.S. Forces Korea for regional deterrence. The network showed Onodera telling reporters after the meeting: “I have confirmed that Secretary Mattis and I are completely in sync on the importance of the abduction issue as well as seeking the North’s abandonment of missiles, including short-range missiles.”