Plan eyed to foster IT, science experts / Integrated strategy to focus on next generation 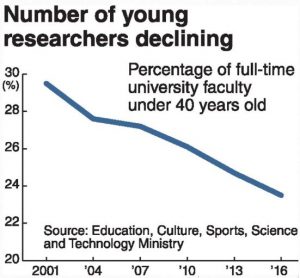 The government aims to substantially increase the number of young researchers and nurture information technology experts specializing in artificial intelligence, a field expected to be widely utilized in various industries, according to the outline of a new technological innovation strategy it plans to draw up.

The move to foster more young researchers and IT specialists comes as new industries are emerging in other countries that harness the benefits of advancing science and technology.

The so-called integrated innovation strategy will be approved by the Cabinet in mid-June.

Previously, innovation strategies were formulated for each separate field, including health, medicine, space science and IT, by relevant ministries, agencies or promotion headquarters.

The envisaged new approach will integrate those strategies. The government also plans to discuss strengthening the functions of the Council for Science, Technology and Innovation, which is chaired by Prime Minister Shinzo Abe.

The council comprises Cabinet ministers, researchers and experts from the private sector. It discusses topics including the industrial application of basic research, strategies for new information and telecommunications technology, and guidelines on bioethical issues.

The new strategy focuses on young researchers who will play a central role in research and development by conducting experiments and writing papers. According to the Education, Culture, Sports, Science and Technology Ministry, the percentage of full-time university faculty under the age of 40 has been declining, reaching just 23 percent in 2016.

Under the new strategy, the government aims to raise this figure to 30 percent or more by fiscal 2023 at major research universities such as the University of Tokyo and Kyoto University. The strategy also calls for allotting more research funds to young researchers.

To facilitate the use of AI at research institutes and companies, the government plans to standardize within five years data formats and criteria that currently vary by field, including medicine, agriculture and space science.

According to an estimate by the Cabinet Office, the IT sector will face a shortage of 50,000 skilled professionals by 2020. The new strategy will focus on educating IT specialists, with the aim of training several tens of thousands of them annually by 2025.

The strategy also seeks to strengthen R&D in smart agriculture, which utilizes AI and robots, and export new technologies overseas. It aims to create a ¥100 billion-plus market at home and abroad in this field.

R&D-type ventures are sharply increasing in the United States and China. The strategy aims to create 20 venture start-ups with a corporate value of more than $1 billion, or ¥110 billion, by 2023 through deregulation and other efforts.

A sense of crisis that the country may fall behind unless ministries and agencies efficiently implement policies on science and technology is behind the government’s decision to compile the technological innovation strategy in June. Japan’s strength in research and development, a driver of economic growth, continues to decline.

An education ministry survey shows that the number of Japanese academic articles in the field of science and technology has decreased 6 percent in the past 10 years, falling from second to fourth in a world ranking. In particular, Japan trails far behind the United States and China in terms of dissertations in the fast-developing field of AI.

Improving the environment for young researchers holds the key to solving the issue.

“Most Nobel Prize laureates in natural science won the accolade for what they had achieved before turning 40. We must secure positions and research budgets for young researchers so they can research freely,” a senior official of the Cabinet Office said.

The new strategy includes numerical targets in a wide variety of fields, including university reform, utilization of AI, support for start-ups and strengthening of agricultural technology. However, it is unclear whether all the goals can be achieved in the face of a limited budget for science and technology.

The government must do more than merely map out a new strategy — it must also steadily execute it and examine its effects.