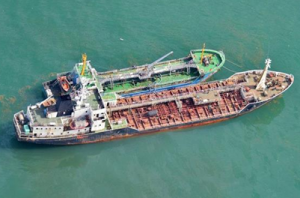 All Saturday morning papers reported on a GOJ announcement on Friday that an MSDF patrol ship spotted in the East China Sea off Shanghai on May 24 a DPRK-flagged vessel connected to an unidentified tanker via a hose. The GOJ reportedly suspects that the two ships were engaged in a ship-to-ship transfer prohibited under UN Security Council resolutions.