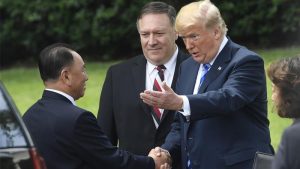 All Saturday evening papers led with President Trump’s announcement on Friday that he will meet with North Korean leader Kim Jong Un in Singapore on June 12 as originally scheduled. The President reportedly decided to go ahead with the historic sit-down after meeting with Kim Yong Chol, the North Korean leader’s right-hand man, at the White House. The dailies claimed that in deciding to hold the summit, the President has apparently moderated his stance on North Korea, highlighting his remark that he no longer wants to use the term “maximum pressure.” Nikkei said that the President’s remarks made after meeting with Kim Yong Chol reflect his strong desire to make history through the denuclearization of North Korea. Mainichi pointed out that the DPRK official was invited into the Oval Office and then seen off by the President upon leaving the White House.

Noting that there is still a considerable gap between the two nations over the speed and scope of denuclearization, the dailies said the President indicated that he will probably hold more than one summit with the North Korean leader. Japanese press took this to mean that the President may allow North Korea to take a phased approach to relinquishing its nuclear and missile programs.

Sunday papers projected that a concrete roadmap toward “complete, verifiable, and irreversible denuclearization” probably will not be agreed upon in the Singapore session, highlighting the President’sstatement that the Singapore meeting will be “a get-to-know-you kind of situation” and the beginning of “a process.” Asahi speculated that the President may be eager to call attention to the diplomatic feat of successfully obtaining a commitment from North Korea on denuclearization, which his predecessors failed to achieve. The daily expressed qualms about the maximum pressure campaign possibly being disrupted since the President has apparently dropped his pledge to apply “maximum pressure” on the Kim regime.

Yomiuri speculated that the President has perhaps come to recognize the need to hold several rounds of talks with the North Korean leader in order to “build confidence” with him. The paper construed the Singapore meeting as an opportunity for the two leaders to reduce the mutual hostility. It also conjectured that a second meeting between the President and Kim Jong Un could be convened at the DMZ on July 27 to mark the 65th anniversary of the signing of the Korean War armistice, possibly with South Korean President Moon in attendance.