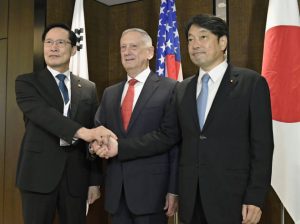 All Monday papers reported from Singapore on a trilateral defense ministerial meeting between the U.S., Japan, and South Korea held on Sunday, noting that in a joint statement issued afterward, the three officials expressed support for ongoing diplomatic efforts to realize the “complete, verifiable, and irreversible” denuclearization of North Korea. Although they also confirmed the need to maintain the sanctions against North Korea required by relevant UN Security Council resolutions, including cracking down on ship-to-ship transfers of prohibited goods, the statement stopped short of using the word “pressure” apparently out of deference to President Trump’s recent remark that he no longer wants to use the phrase “maximum pressure.”

According to an unnamed senior DOD official cited by Asahi, Secretary Mattis did not refer to “maximum pressure” during the trilateral session. The daily said this marked a sharp contrast with the previous meeting between the same three ministers held last October, during which they agreed to step up pressure on the North. Yomiuri speculated that the three defense chiefs probably avoided using language that might provoke the Kim regime prior to the Singapore summit between President Trump and Kim Jong Un. Defense Minister Onodera reportedly told the press afterward: “North Korea has been actively seeking dialogue lately. It is needless to say that pressure and dialogue need to be balanced…. There is a consensus that pressure will continue until the problem is resolved.” According to Yomiuri, a GOJ source voiced concern about the failure by the three ministers to mention “pressure” even though North Korea has not taken any concrete measures toward denuclearization.