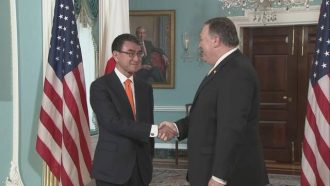 NHK reported this morning that Foreign Minister Kono met with Secretary of State Pompeo for about 25 minutes on Wednesday in Washington. The network said Kono received a briefing from the Secretary on the ongoing preparations for the first-ever U.S.-DPRK summit slated for June 12 in Singapore, adding that the two ministers reaffirmed the basic policy of calling for North Korea’s complete, verifiable, and irreversible denuclearization and imposing economic sanctions based on the UNSC resolutions. According to the network, they also agreed to meet again after the U.S.-DPRK summit. The network said Kono later briefed Prime Minister Abe, who had just arrived in Washington, on his meeting with Secretary Pompeo, adding that Kono is also expected to attend the U.S.-Japan summit on Thursday. On President Trump’s remarks that he no longer wants to use the phrase “maximum pressure” against North Korea, Kono told reporters after the meeting: “I think it was a message to Chairman Kim Jong Un that he should respond in such a way that imposing maximum pressure will no longer be necessary.” All commercial networks carried similar stories.