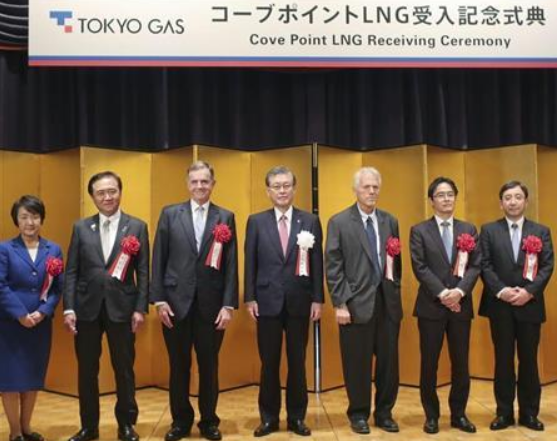 On June 6 Tokyo Gas held a ceremony to mark the launch of the procurement of liquefied natural gas (LNG) produced from U.S. shale gas. About 70 people concerned attended the ceremony held in Yokohama City, home to the utility’s LNG terminal. During a speech, Tokyo Gas President Takashi Uchida underscored the significance of importing American LNG, saying, “It will further strengthen the cooperative relations between Japan and the U.S. in the energy sector.”

Tokyo Gas is the first Japanese company to procure shale-gas-derived LNG under a long-term contract. The company plans to import 1.4 million tons annually and the first batch of some 70,000 tons arrived [in Yokohama] on May 21.

Uchida explained that the price of American shale gas is less subject to crude oil prices, which fluctuate according to political situation in the Middle East, and that this gives it a huge business advantage.

The ceremony was also attended by Kanagawa Gov. Yuji Kuroiwa, Yokohama Mayor Fumiko Hayashi, and officials of the U.S. Embassy in Tokyo.