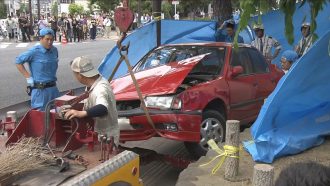 NHK’s “Close-up Gendai+” reported on the increasing number of traffic accidents involving elderly drivers, including an incident in which a car driven by 90-year-old woman plowed into a group of pedestrians, killing one, in Yokohama last month. The program said the woman had passed the mandatory test for elderly drivers and renewed her driver’s license just this March. According to the program, 13% of fatal traffic accidents in 2017 involved drivers aged 75 or older, and the percentage is increasing. The program said since many elderly people use cars to go for medical treatment or grocery shopping, they will need to be provided with sufficient support after surrendering their licenses.