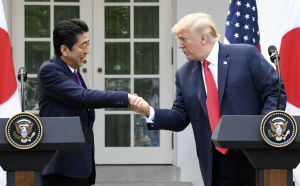 All national dailies on Saturday reported extensively on the summit held between President Trump and Prime Minister Abe in Washington on June 7, during which the two leaders reportedly discussed how to deal with North Korea and U.S.-Japan trade. Mainichi ran an editorial saying that it was appropriate for the two leaders to confirm their policies in dealing with North Korea, including the need to maintain sanctions and resolve the abduction issue. Yomiuri wrote in an editorial that the summit was appropriate and timely because the two leaders discussed the latest information on North Korea and coordinated their policies ahead of the Singapore summit. The paper wrote that LDP Policy Research Council Chairman Kishida welcomed the results of the summit by saying that it was timely and useful because President Trump delivered a strong message about North Korea. Komeito Secretary General Inoue stated that the summit produced major results because President Trump and PM Abe reconfirmed their commitment to cooperating closely in resolving the abduction issue. Nikkei pointed out that Abe avoided using the term “pressure” in the post-summit press conference to give priority to maintaining unity between Washington and Tokyo out of consideration for the President’s policy of attaching importance to dialogue.

The national dailies also took up the President’s remarks on U.S.-Japan trade. Asahi wrote that although the prime minister explained Japan’s procurement of American defense equipment and Japanese firms’ investment in the United States, the two leaders reportedly did not discuss the issue of U.S. tariffs. The paper speculated that Abe did not bring up the issue based on the view that it would be unhelpful to have a trade dispute with the United States ahead of the Singapore summit because Japan needs America’s cooperation in resolving the abduction issue. Mainichi and Yomiuri expressed similar views, with Yomiuri adding that although the two nations agreed to convene the first session of the new “free, fair, and reciprocal” trade talks in July, Japan will probably maintain its position of not making concessions beyond the level of market opening agreed on in the TPP. Claiming that the President apparently indicated the possibility of calling on Japan to open its auto market by reportedly saying that the American people are buying a lot of products from Japan, especially automobiles, Sankei speculated that the U.S. government may urge Japan to make concessions by hinting at the possibly of imposing restrictions on auto imports.