G7 nations agree on DPRK, but differ over trade 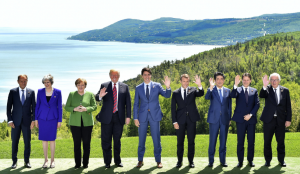 All national dailies gave extensive coverage on Sunday to the G7 summit held in Canada on June 8-9. The papers wrote that the G7 leaders agreed to cooperate on the denuclearization of North Korea, including providing support for a successful summit between President Trump and DPRK leader Kim Jong Un in Singapore on Tuesday and fully implementing UNSC sanctions resolutions. Prime Minister Abe reportedly obtained support from the other G7 nations in resolving the abduction issue.

However, the papers wrote that major differences remained between the United States and the European members and Canada over such issues as trade, including the U.S. tariffs on steel and aluminum, the Paris Agreement on climate change, and the Iran nuclear deal. The papers wrote that the leaders of Canada and all the European members except Italy expressed opposition to President Trump’s proposal to invite Russia to return to the G7. Prime Minister Abe did not express a clear position on the proposal but simply stated that it is necessary to hold dialogue with Russia. Asahi conjectured that Abe was trying not to isolate President Trump in the G7 discussions, while Yomiuri claimed that the prime minister was attempting to maintain G7 unity out of concern that a dispute over trade could undermine cooperation against the DPRK.

Asahi claimed that this year’s G7 summit produced little in the way of results and that cooperation among the group is being undermined by the rift between the Trump administration and other members. Mainichi wrote that the G7, which has addressed global issues based on the shared values of free trade and democracy, is facing a critical test on whether its members will be able to uphold the unity they have maintained for 40 years. Nikkei wrote that the differences between the G7 nations could affect their ability to address global economic risks. Sankei claimed that concern over the possibility of the Trump administration imposing a 25% tariff on autos will grow if the gap between the United States and the other G7 nations remains, speculating that additional tariffs would likely deal a major blow to Japan.