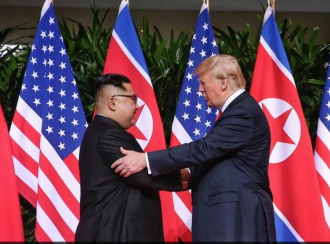 All networks gave extensive live coverage to the U.S.-DPRK summit in Singapore, showing President Trump and Chairman Kim Jong Un shaking hands at Capella Hotel and participating in an expanded meeting with senior officials. NHK said that during the expanded meeting, President Trump reportedly told Kim: “We will resolve major issues that have not been resolved in the past.” Kim reportedly said in response: “I am determined to start a huge project together with the President.”

An NHK reporter said President Trump looked more serious than ever, adding that while he has been saying that he will know within the first minute whether Kim is serious or not, it appears that he has acknowledged Kim as a negotiating partner since he appeared to take a positive attitude toward future meetings with Kim after their one-on-one meeting. The reporter said, however, that the U.S. and North Korea apparently remain apart over the definition of complete denuclearization, the timeline for it, and the verification process. He added that while the President has been positive about declaring the end of the Korean War, which would lead to a security guarantee for the North Korean regime, in exchange for complete denuclearization, President Trump is facing a moment of truth in that he must decide whether to make concessions to be able to reach a concrete agreement on denuclearization.