During the G7 Charlevoix Summit held in Canada on June 8-9, Japan was actively messaging on social media along with the other governments, eagerly participating in Twitter diplomacy. The Japanese government tried out creative angles and composition in its photo and video postings to effectively promote Japan’s position.

The main focus of this summit was the joint communique issued by the G7 leaders. The drafting of this document became a tortuous process due to the gap between the Trump’s position and those of the other leaders. There was a session of unscheduled discussions by the leaders during the summit, in which there was great interest in the roles played by each leader in this process.

The session started at 10:20 p.m. Japan time on June 9 and lasted for about 40 minutes until 11:00 p.m. A photo of the session was uploaded by the German government in the predawn hours of June 10, and it went viral instantly. 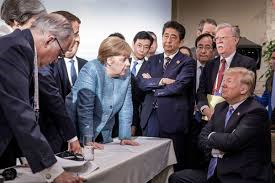 On the Japanese side, Deputy Chief Cabinet Secretary Yasutoshi Nishimura, who was accompanying Prime Minister Shinzo Abe, posted the same photo on his Twitter account and tweeted the comment: “Prime Minister Abe led the discussion by saying ‘the G7 should unite to send out messages on promoting free and fair trade.’”

Later, Abe posted a tweet with a photo taken by a Japanese government official. The composition was similar to the German photo, but it gave a different impression. Abe had his hands on the table and he was leaning forward and looking intently at Trump. In this photo, German Chancellor Angela Merkel was not looking Trump in the eye but was looking down. It showed that Abe was serving as mediator for Trump and the other leaders. 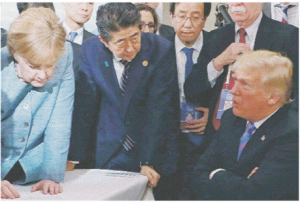 Meanwhile, the U.S. posted a photo showing the other leaders listening closely to Trump, while the photo posted on French President Emmanuel Macron’s Twitter account portrayed him trying to persuade Trump of something. Depending on the angle and composition, photos of the same scene projected completely different leading players. It can be said that this was also a propaganda war to demonstrate the leaders’ performance on the world stage at the G7 summit.

According to a government source, the photos capture a scene when Merkel was pressing Trump on some fine points in the communique’s wording. Abe, who was standing between them, said: “It will be fine if we can  send out the message that a free and fair trade system is important.” Trump said: “Wrap it up for us, Shinzo.”

In the past, governments used films, TV news, and so forth for their propaganda to win the people’s support. The media’s importance remains unchanged today, but it has become more effective with the advent of the Internet.

Today, officials directly involved in politics and diplomacy, such as Abe and Nishimura, communicate directly with the public. They post photos that tell the story in one glance, and slickly edited short videos are even more effective. During the latest G7 summit, one-minute videos were also posted on the Twitter accounts of the Kantei and Abe.

Trump is the one who accelerated this trend. Since his inauguration, he has tweeted out various policies to the public directly. It is possible to seize the initiative in propaganda warfare by sending out messages without going through the media. If the other countries do not enter the fray, they will lose out because messaging will be in the U.S.’s favor not only on domestic issues but also those concerning other countries, such as the G7 summit. The online propaganda war is beginning to have a great deal of significance for diplomacy in addition to face-to-face negotiations.