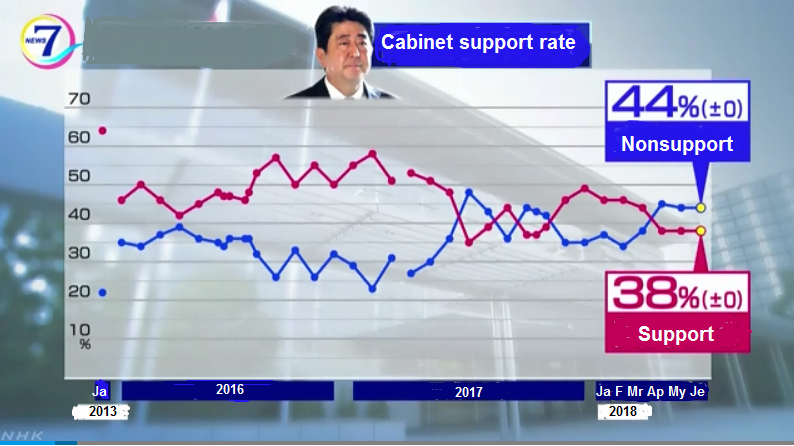 The nationwide survey was conducted by NHK from June 8 over three days on a computer-aided random digit dialing (RDD) basis and targeted men and women aged 18 or over with calls placed to landline and mobile phone numbers. Valid responses were received from 1,218 of the 2,159 people polled. The valid response rate was 56%.

Pollees were asked if they thought the U.S.-DPRK summit to be held on June 12 would be able to reach an agreement on the complete denuclearization of North Korea. Some 9% of respondents said yes and 43% said no while 37% said they “can’t say either way.”

Some 18% of all respondents said the summit would lead to progress on the abductions issue while 43% disagreed, and 29% said they “can’t say either way.”

Special investigators at the Osaka District Public Prosecutors Office decided not to indict Nobuhisa Sagawa, former head of the Finance Ministry’s Financial Bureau, and others, saying it is not possible to determine that the changes were substantial enough to constitute a criminal offense. Some 4% said they are “very satisfied” with this decision and 20% said they are “somewhat satisfied” while 32% said they “are not very satisfied” and 34% said that they are “not satisfied at all.”

With the release of the results of the investigation into the falsification of official documents, the opposition parties are demanding that Sagawa be summoned once again to give testimony at the Diet. Meanwhile, the ruling parties are taking a cautious stance. Some 43% of pollees said that “he should be summoned again” while 21% said “this is not necessary” and 26% said they “can’t say either way.”

Creation of a new veterinary school

Claiming it provided incorrect information on an Abe-Kake meeting on the school’s plan to create a veterinary school, Kake Educational Institution has denied the veracity of the Ehime document. The school operator has apologized to Ehime Prefecture and others.