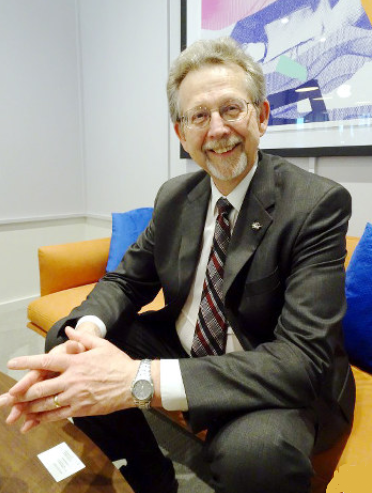 NASA Chief Scientist James Green smiles in an interview with The Mainichi on May 24, 2018. (Mainichi)

NASA chief scientist James Green is strongly interested in continuing cooperation with Japan and other international partners on U.S. projects to send humans back to the moon in the 2020s, and to Mars in the 2030s, he told the Mainichi in a recent interview.

Green assumed his post on May 1 this year to advise the NASA administrator after 38 years of service at the U.S. space agency. Twelve years of that was spent as the head of the Planetary Science Division, where he oversaw a series of successful launches and managed missions such as the Spirit, Curiosity and Opportunity Mars rovers and the New Horizons probe to Pluto.

Green said that the Japan Aerospace Exploration Agency (JAXA) has shown interest in joining the Lunar Orbital Platform-Gateway, a project to deploy an orbital space platform around the moon as a launch pad for journeys to Mars and other purposes.

“Those discussions just started now. The gateway has a capability to connect modules just like the (International) Space Station. That provides opportunities for other countries to be able to develop modules and then be connected to the gateway,” Green said in the May 24 interview.

The scientist also noted that Japan’s H-II heavy-lift launch vehicle is capable of delivering large payloads. “Those (rockets) could be used for landers or rovers that would go to the surface (of a planet), or for orbiters that would make surveys or perform other functions,” he explained.

Green said NASA’s cooperation with JAXA is “really tremendous” on many robotic missions, including the Japanese agency’s Martian Moons Exploration (MMX) project to launch a probe to the moons of Mars, Phobos and Deimos sometime in the early 2020s. “JAXA is the first space agency that will be able to provide extensive information about the moons of Mars,” he said. MMX will carry a Gamma-Ray and Neutron Spectrometer to be provided by NASA. Nicknamed MEGANE, the device will “see” elements on the moons’ surface.

According to Green, Phobos in particular is being considered as a gateway for landers and rovers bound for the surface of Mars. “It may be the place humans will go and set up a variety of equipment or even go initially to man the gateway,” with Phobos serving as a space station for Mars, Green said. He added that JAXA through the MMX project will be able to provide information to determine how the Martian moon can be used for human exploration.

Regarding space cooperation with Russia, a country with a deteriorating relationship with the United States, Green said, “Even though the political environment changes over time, if you look back historically, the peaceful uses of space and our ability to work across country lines, I think, have been very important. It allows us to keep dialogue, to do something together. I think that’s going to continue.”

Green said the U.S. and Russian space agencies started discussing a plan to go to Venus together when he was the head of the Planetary Science Division. “They (Russia) will do a series of Venus missions in partnership with us, so we would be very excited about working with them.”

Green expressed hope that the current international partners of NASA will continue to work in the lunar gateway project. “We believe that’s important not only to leave low Earth orbit and going to deeper space such as the moon, but those partners would want also to carry along cooperation to Mars,” Green said.

President Donald Trump announced in December 2017 that he will return astronauts to the moon and send them further to Mars. His administration nevertheless faces criticism that it is disregarding science and does not provide enough funding for projects such as those related to climate change. Green emphasized that that is not the case when it comes to his agency.

Green, who as a scientist specializes in the magnetospheres around the earth and Jupiter, is also a historian and interested in balloons used in the American Civil War (1861-1865) for reconnaissance and other purposes.

“The top technology of the time was the telegraph and the balloons. The balloon … takes high ground, makes observations, and can provide important intelligence. So like satellites are today, those technologies were in the past. If we study history, it guides us in terms of what we would do in the future.”

That interest has personal roots: Green’s grandmother told him when he was 12 that his great, great grandfather took part in the war. “That’s how I got to be excited to learn about the Civil War, try to find out what he did in the war. And that’s when I discovered Civil War balloons and got excited about that because it connects well with NASA, making observations from above.”