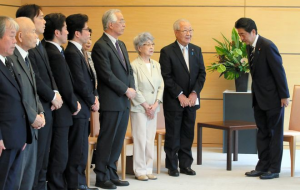 North Korea is a dictatorship ruled by a leader with absolute power.

Direct talks with Kim, chairman of the ruling Workers’ Party, are undoubtedly a highly effective way for Japan to sort out its problems with North Korea.

Tackling the crucial issue of North Korea’s abductions of Japanese citizens decades ago is a race against the clock, especially for the families of victims. Directly urging Kim to take action is apparently the shortest path to a solution.

After Kim’s meetings with the leaders of China, South Korea and the United States, there is a compelling case for Japan to pursue a summit with the secluded nation, even though it should have set things in motion much earlier.

Tokyo should now start reinventing its relationship with Pyongyang in light of the growing trend toward reconciliation in this part of the world.

During his recent meeting with U.S. President Donald Trump, Kim reportedly indicated his willingness to hold talks with Japan and did not stick to the regime’s usual line that the abduction issue has already been settled.

We have only hearsay information about Kim’s remarks during the meeting in Singapore and don’t know exactly what he said, or meant.

If, however, he is intent on ending his country’s current international isolation, it seems likely that he is ready to pursue dialogue with Japan as well.

The Abe administration has declared that solving the North Korea abduction issue is its most important diplomatic challenge. But it has failed to make any notable achievement with regard to this long-running dispute.

Pyongyang’s insincere attitude in dealing with the issue has been a big obstacle to a settlement. On the other hand, the Abe administration’s attempts to use the situation surrounding North Korea for political gains have not been quite helpful, either. Before the Lower House election last year, for instance, Abe attempted to create a sense of crisis by describing rising tensions over North Korea’s arms programs as “a peril for the nation.”

The whisper within the ruling camp is that Abe is considering a meeting with Kim on the sidelines of an international conference to be held in Russia this autumn.

Some political pundits say the idea is to schedule the event close to when the leadership election of the ruling Liberal Democratic Party will be held.

If Abe allows his decisions concerning his meeting with Kim to be influenced by political calculations, he will only weaken his hand in negotiations with Pyongyang.

North Korea’s past abductions of Japanese nationals and its nuclear and missile programs have long been sticky diplomatic challenges for Japan that have a direct bearing on the lives and safety of the people of this country.

Abe should not mix his political agenda with his administration’s efforts to tackle these challenges. They need to be completely separate. Abe should seek a meeting with Kim at the best possible timing while making every effort to be properly prepared for the summit.

On June 14, Abe met with the families of abductees and listened to their sorrow, pain and desperation to be reunited with their loved ones.

If solving this issue is his administration’s top foreign policy priority, Abe needs to make a cool-headed analysis of the lack of progress to date and hammer out a plan to fix the problems instead of simply pledging to bring an end to the sufferings of the victims and their families.

The 2002 Pyongyang Declaration, signed by Prime Minister Junichiro Koizumi and Kim Jong Il, the current leader’s father, is still a valid diplomatic document that sets out basic principles for the bilateral relationship. The declaration commits the two countries to work toward “the settlement of the unfortunate past between them and outstanding issues of concern.”

Tokyo and Pyongyang can also refer to a 2014 Stockholm agreement on the abduction issue that is in line with the principles set by the Pyongyang Declaration.

The Japanese government should also weigh its own investigation into the fates of abductees in North Korea, a possibility it has so far been reluctant to consider.

The Abe administration needs to map out a coherent strategy for Japan’s own dialogue with North Korea for solving all the key bilateral issues, including security threats posed by Pyongyang’s nuclear weapons and short- and medium-range missiles.