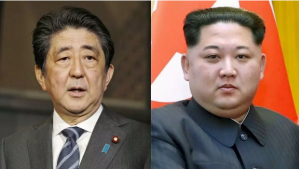 “Ultimately, I myself have to meet with [Kim],” Abe said on a Japanese television program. “I want to foster a relationship of trust with North Korea.”

International forums could provide an opportunity for the two leaders to meet, if Kim attends. Russian President Vladimir Putin has invited the North Korean leader to the Eastern Economic Forum in Vladivostok in mid-September, and the United Nations General Assembly will convene in New York later that month.

Abe also said that Japan is prepared to shoulder part of the cost of North Korean denuclearization by helping to fund inspections by the International Atomic Energy Agency.

“Since Japan would enjoy the benefits of peace from the end of the nuclear threat, it stands to reason that we would” contribute, he said.