Russia or UN? Abe and Kim must agree on summit site: Pleasing Putin will rile China and US, but hurdles high for New York 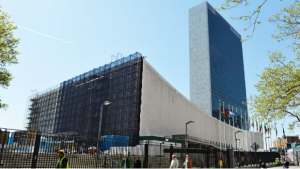 Abe may prefer to meet with Kim at the United Nations headquarters in New York, but no North Korean leader has ever visited the U.S. before. © Kyodo

Abe has responded to Kim’s openness to dialogue expressed in his historic summit with U.S. President Donald Trump last week. The prime minister sees such a meeting as an opportunity to extract concrete action on the decades-ago abductions of Japanese nationals by Pyongyang. But many obstacles remain.

Russia’s Vladivostok could provide the first opportunity for the two leaders to cross paths. Abe is scheduled to attend the Eastern Economic Forum the city will host in mid-September.

Seeing an opening, President Vladimir Putin has proposed a Russian visit by Kim that coincides with the international forum.

Kim may be more willing to go to Vladivostok, given its proximity to North Korea. Holding a summit there would suit Putin’s desire to maintain clout with North Korea. This, in turn, could help improve Tokyo’s ties with Moscow.

Yet pleasing Russia could anger China, which has assumed the role of a North Korean patron. Trump, too, could be irked by Japan turning to Russia. And given that Russia is not an ally of Japan, possible eavesdropping by Moscow on the Abe-Kim talks could raise concern.

A meeting at the U.N. coinciding with the annual General Assembly in late September would resolve such geopolitical concerns for Tokyo. Trump has hinted at meeting with Kim again. If the North Korean leader travels to New York, a second Trump-Kim summit is very likely. Abe could meet with Kim after that.

Yet the hurdles are high. The U.N. is the body enforcing sanctions against North Korea for its nuclear and missile tests. No North Korean leader has ever visited the U.S., and allowing a trip there by Kim could prove a challenge. Geographically, the U.N. is much farther from North Korea than Singapore.

Both proposals involve Kim attending an international meeting. And this could provide political cover for both leaders, as they will be able to position the talks as being held on the sidelines. Abe could avoid political backlash even if the meeting yields no tangible results.

A summit still could be held elsewhere apart from any international conference. Meeting in Pyongyang would be politically risky for Abe. By going to Kim’s home turf, the prime minister could demand serious action by the North Korean leader. But returning empty-handed would deplete his political capital.

“Pyongyang is the very last choice,” an Abe aide said. “Such a meeting will be held only when the return of abductees is guaranteed.”

“A natural thing to do would be for the two leaders to hold a brief chat in Vladivostok and promise a longer meeting at the U.N. General Assembly,” said Kunihiko Miyake, research director at the Canon Institute for Global Studies.