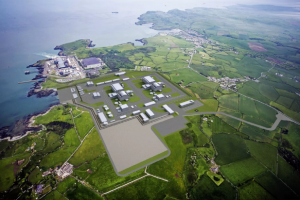 A rendering of Hitachi’s planned nuclear plant in Wales. The company wants to reduce its exposure by inviting public-private consortiums from Japan and the U.K. to invest. (Courtesy of Hitachi)

TOKYO — Hitachi continues to search for ways to share the burdens of building a British nuclear power plant and now is sounding out the Development Bank of Japan and several Japanese power companies about taking stakes in the project, a high hurdle as many are still struggling with the heavy financial fallout from the 2011 meltdown at Fukushima.

The cost projection for the project on the Welsh island of Anglesey has ballooned to 3 trillion yen ($27.1 billion). To keep it commercially viable, the British government pledged on June 4 to arrange the entire 2 trillion yen in necessary loans, twice its original offer.

In addition, 900 billion yen is to be invested in the Hitachi subsidiary responsible for developing and building the plant, with 300 billion yen coming from a consortium of Japanese companies and the Japanese government.

Hitachi is also asking the utilities for technical support. Japan Atomic Power already plans to support such aspects as operation and maintenance of the U.K. plant with U.S. energy provider Exelon. Tepco and Chubu Electric both operate in Japan boiling water reactors, the same type that will be built on Anglesey.

But winning participation from these companies will not be an easy task. Tepco must raise 16 trillion yen of the 22 trillion yen needed to decommission the Fukushima Dai-ichi nuclear plant and compensate victims of the meltdown. The company has said it will improve profitability to do so, but such efforts are still in the preliminary stages.

“It would be hard to win the public’s acceptance,” said Tepco executive on investing in a nuclear power project overseas.

Japan Atomic Power is subsisting on fees from utilities while all of its nuclear plants remain shut. The company hopes to get the Tokai No. 2 power station in Ibaraki Prefecture back online, but is relying on aid from Tepco and others to cover safety expenses. Some have said that investing in the U.K. project is unrealistic given the situation.

There are still major details to determine about Hitachi’s U.K. nuclear project, such the price of the power that it produces, and fleshing these out will be essential in order to negotiate participation in the project.