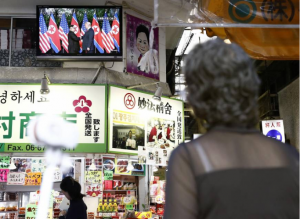 A woman looks at a television monitor in Osaka’s Korean town in Higashinari Ward on Tuesday that was showing the U.S.-North Korea summit in Singapore, held earlier in the day. | KYODO

OSAKA – Though it remains to be seen how history will judge the June 12 summit between U.S. President Donald Trump and North Korean leader Kim Jong Un, present Japanese and Western views across the political spectrum are generally either skeptical of North Korea’s sincerity in honoring any agreement or of America’s ability to sincerely negotiate an effective one.

But no matter how one views the summit, it has set a precedent and created expectations worldwide that leaders in not only the U.S., but also Japan will now work harder to improve relations with North Korea.

For Prime Minister Shinzo Abe in particular, that is a problem. Between the unresolved abduction issue and political allies who are wary of, if not hostile toward, friendly relations with Pyongyang, Abe and his allies lack the deep expertise and informal back-door channels to North Korea that his less ideologically rigid predecessors in the Liberal Democratic Party once enjoyed.

This reality is felt especially in the Kansai region. While few Koreans or Japanese in Kansai have much faith in Abe’s ability to do more than follow Trump’s lead on North Korea, the days prior to the summit saw some out-of-the-box thinking whispered in the halls of Osaka’s political and media establishments as to how Tokyo might improve relations with Pyongyang.

Perhaps the craziest idea floated by some media pundits was for Japan to extend Kim Jong Un an invitation to next year’s Group of 20 leaders’ summit in Osaka. The G20 host country typically invites a few non-G20 countries to attend as observers. These are countries that have some special connection to the host country, are impacted by the G20 agenda for that year, or are invited for other political reasons.

What would a Kim visit to Osaka and Kansai look like? For starters, it might be a family reunion. Kim’s mother is said to be Ko Yong Hui, a Korean-Japanese born in Osaka who was Kim Jong Il’s third wife. A Kim visit would certainly put the spotlight on the history of Korean residents in Japan in a way nothing else would or could.

At the summit itself, Kim could engage with not only world leaders but also Japanese businesses who see North Korea as the last great untapped market and are worried about losing out to Japan’s Asian neighbors and the U.S. if North Korea does open up.

Yes, yes. Crazy. Unthinkable. Impractical. An Osaka joke. Stupid and dangerous, even, the thought of Kim being feted in Osaka (and possibly by neighboring Kyoto and Nara) by 20 world leaders next year, I can hear you saying.

But seven months ago, the idea of a summit between a U.S. president and the leader of North Korea was considered impossible as well.

Obviously, for a Kim visit to the G20 Osaka summit to become even remotely possible, a whole lot of things must happen first. Denuclearization talks must show rapid progress and Kim has to address the abduction issue in ways that convince Japan’s conservative leadership to risk making a political move as bold and controversial as offering him an invite to Osaka.

To get to a point where the trust is there will require unprecedented amounts of formal and informal diplomatic efforts — and a lot of compromise from both sides — between now and next June, when the G20 takes place.

Still, Osaka’s merchants have long prided themselves on risk-taking when it comes to new business ventures. Even if it doesn’t happen, publicly supporting the idea of Japan inviting Kim to the G20 Osaka summit would at least show that they are also unafraid of taking risks when it comes to new political ventures.