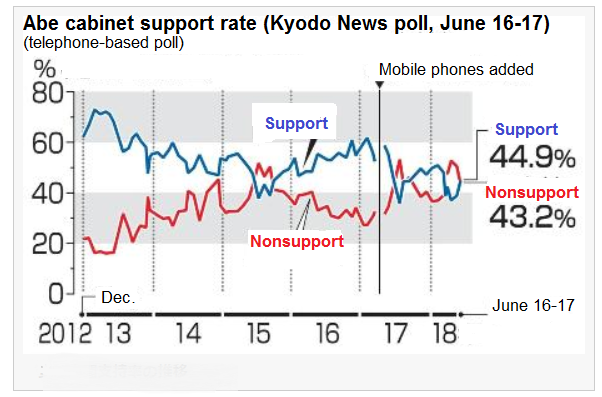 The approval rating for Prime Minister Shinzo Abe’s Cabinet stood at 44.9 percent in June, up 6 points from the previous month to surpass the disapproval rating for the first time since early March, the latest Kyodo News poll showed Sunday.

The rate compares with 38.9 percent in May and 37.0 percent in April, when public support for the Cabinet hit the second-lowest level in Kyodo polls since Abe returned to power in 2012.

The latest telephone poll, conducted Saturday and Sunday across the nation, also showed most respondents were negative about the prospects for a complete denuclearization of the Korean Peninsula, with only 16.4 percent saying it can be achieved while 77.6 percent do not think so.

Amid a recent spate of meetings between North Korean leader Kim Jong Un and leaders of other countries, 81.4 percent said Abe should hold a summit with Kim.

Opinion was split on the Abe Cabinet’s diplomacy in relation to Pyongyang, with 46.1 percent saying they don’t support it, edging 44.2 percent who favor it.

On the Finance Ministry’s decision in early June to punish 20 officials, including former senior bureaucrat Nobuhisa Sagawa, for doctoring and destroying documents related to the ministry’s murky public land sale to a nationalist school operator with ties to Abe’s wife Akie, 78.5 percent said the punishment has yet to settle the issue.

Only 15.7 percent said the issue involving the Moritomo Gakuen school operator, part of cronyism allegations against the premier, has been resolved.

On who should be elected in the ruling Liberal Democratic Party’s presidential election in September, Abe, the current party leader, and Shinjiro Koizumi, a rising star in the LDP and son of former Prime Minister Junichiro Koizumi, both garnered 26.1 percent to top the list.

By political party, the LDP remained the most popular, supported by 38.8 percent. It was followed by the main opposition Constitutional Democratic Party of Japan at 12.2 percent, the LDP’s junior coalition partner Komeito at 3.7 percent and the Japanese Communist Party at 2.5 percent.

But 36.0 percent, rivaling the support rate for the LDP, said they don’t support any political party.

The latest opinion poll was based on responses from 525 voters using fixed-line telephones and 519 voters with mobile phones.