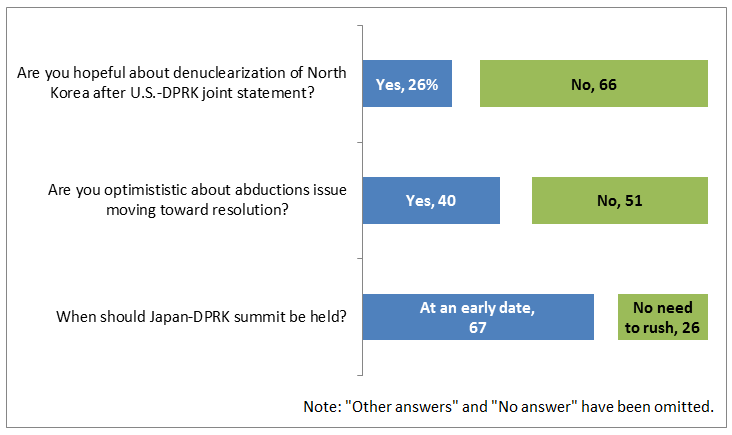 Two-thirds of voters want Prime Minister Shinzo Abe to meet with North Korean leader Kim Jong Un at an early date, but a majority do not expect Abe to resolve the abduction issue, an Asahi Shimbun survey showed.

Similarly, 73 percent of respondents in the nationwide weekend survey positively evaluated the June 12 summit in Singapore between Kim and U.S. President Donald Trump, but only 26 percent said they expect the leaders’ joint declaration to lead to North Korea’s denuclearization.

Sixty-six percent of respondents do not expect North Korea to denuclearize, according to the survey.

Regarding an Abe-Kim summit, 67 percent of respondents said the two should meet as soon as possible, up from 55 percent in a survey conducted in May. Twenty-six percent in the latest survey said there was no need to rush a summit.

However, only 40 percent of respondents said they held high hopes of Abe resolving the issue of Japanese nationals abducted by North Korea decades ago, while 51 percent said they did not expect a breakthrough.

Showing that this has become a partisan issue, 61 percent of respondents who approve the Abe Cabinet said they held high hopes the prime minister would resolve the abduction issue, while 32 percent did not.

Among those who disapprove of the Cabinet, only 25 percent held hopes the issue will be resolved, compared with 69 percent who did not.

Respondents were also asked about the bill railroaded through a Lower House committee on June 15 that outlines how integrated resorts, including those with a casino, can be operated. The ruling coalition plans to extend the current Diet session to pass the legislation in the Upper House to make it law.

Only 17 percent of respondents in the survey said the legislation should be passed in the current Diet session, while 73 percent said there was no such need.

That was almost unchanged from the 71 percent in the April survey who said there was no need to rush passage of the bill.

Even among respondents who supported the ruling Liberal Democratic Party, 63 percent said quick passage was unnecessary, the survey showed.

Respondents were also generally unsupportive of a ruling coalition proposal that would add six seats to the Upper House in an attempt to reduce vote disparity.

Forty-nine percent of respondents opposed the bill, while only 27 percent supported it.

The Asahi Shimbun placed calls with randomly selected landline and mobile phone numbers for the June 16-17 survey. Valid responses were received from 976 voters contacted at landline numbers and 1,023 contacted via their mobile phones.