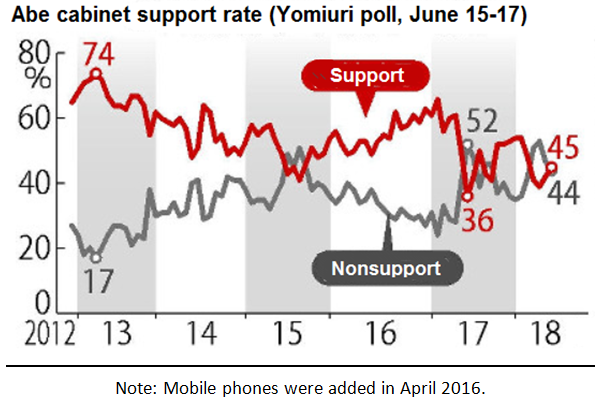 According to the Yomiuri Shimbun’s nationwide public opinion poll conducted on June 15–17, the Abe cabinet support rate was 45%, rising for the second consecutive month. The improvement in public support of the premier is thought to be attributable to higher expectations for Abe’s diplomacy as major strides were made on issues related to North Korea with the holding of the first-ever U.S.-DPRK summit.

LDP Diet Affairs Committee Chairperson Hiroshi Moriyama said to reporters on June 17, “Progress has been made in the world situation, and the people of Japan see that Prime Minister Abe is doing solid work.”

Abe has expressed a desire to hold a Japan-DPRK summit, and more than half of all respondents said that the summit should be held soon. This suggests that the people have high expectations for the premier’s diplomatic skill.

The Japanese people continue to take a harsh view of Abe’s handling of domestic affairs.

Asked about key legislative bills being debated now in the final days of the Diet session, only 24% of respondents said the work-style reform bill should be enacted during the current Diet session (poll conducted on May 18–20: 25%) while 21% of pollees said the integrated resort implementation bill (casino bill) should be passed (23%).

Some 84% of pollees said that the Moritomo scandal has not been explained adequately. Even 74% of Liberal Democratic Party (LDP) supporters took that view. There is a chance that the cabinet support rate may again take a dive depending on Abe’s handling of the Diet and on developments related to North Korea issues. “I would like to see the government humbly fulfill its responsibility to give proper explanations [to the people],” commented Komeito Acting Secretary-General Tetsuo Saito.

Democratic Party for the People Co-chair Yuichiro Tamaki said to reporters on June 17, “The Moritomo and Kake Gakuen scandals caused distrust, and now they have been concealed.” Constitutional Democratic Party of Japan Diet Affairs Committee Chairwoman Kiyomi Tsujimoto stressed that she will pursue the Moritomo and other scandals further, saying, “The government says it will get to the bottom of the scandals, but it hasn’t done anything at all.”

[Polling methodology: The nationwide survey was conducted on June 15–17 on a computer-aided random digit dialing (RDD) basis and targeted voters aged 18 or over with calls placed to landline and mobile phone numbers. Valid responses were received from a total of 1,090 persons, including 527 persons (out of the 891 households with one or more eligible voters) for landline numbers and 563 persons (out of the 1,201 persons who answered) for mobile numbers. The valid response rates were 59% for landline numbers and 47% for mobile numbers.]