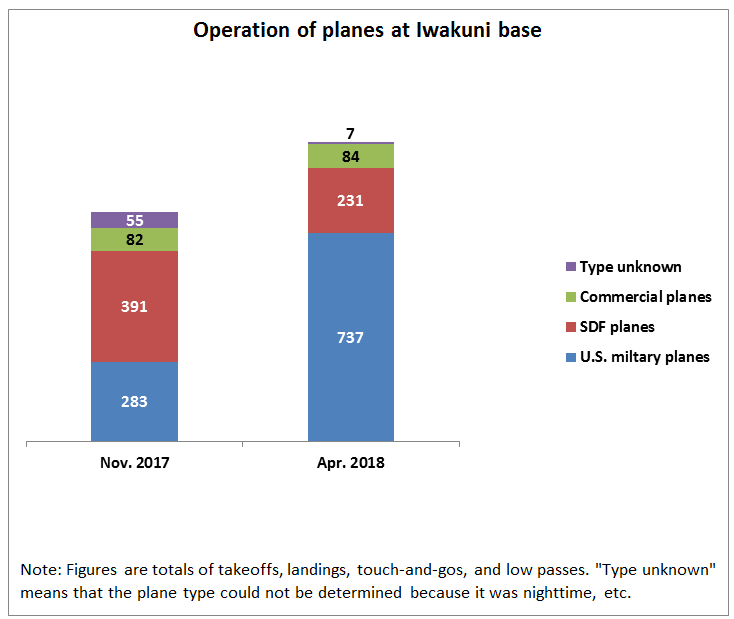 About 60 carrier-borne aircraft have been relocated to the U.S. military’s Iwakuni base (Iwakuni City). To look into the impact of this deployment, Chugoku Shimbun investigated the status of plane operation before and after the relocation. The survey examined the number of takeoffs and landings during a one-week period in November 2017 (before the transfer of planes was started in earnest) and during a one-week period in April 2018 (after the transfer was completed). The survey found that operation of U.S. military planes was up 2.6-fold. There were also congested times when there were more than 50 takeoffs and landings per hour, if Self-Defense Force and commercial planes are included. The survey proved that flights by U.S. military planes have increased because of the transfer.

The survey was conducted on Nov. 6–12, 2017, and on April 21–27, 2018. From a spot where the runway was visible, the reporter confirmed visually and aurally takeoffs and landings during the runway’s hours of operation (6:30 a.m.–11:00 p.m.) as well as “low passes” (LPs), where the plane passes at a low altitude over the runway, and “touch-and-gos” (TGs), where the plane touches down and then immediately takes off.

Iwakuni base is jointly used by the U.S. military and the Maritime Self-Defense Force. Planes serving Iwakuni Kintaikyo Airport also use the runway. The runway was used a total of 811 times in November 2017. In contrast, it was used 1,059 times in April 2018, up 1.3-fold from November. These figures include usage by planes whose model and affiliation could not be confirmed because visibility was poor or it was nighttime.

By plane type, the F/A-18 Super Hornet, a carrier-based fighter jet, was the most frequent with 338 usages, which is 16.9 fold the number in November. The EA-18G Growler, a carrier-based electronic warfare aircraft, used the runway 35 times, up 5.8-fold. The Marines F/A-18 Hornet, a fighter jet which was stationed at Iwakuni before the relocation of the carrier-borne planes, used the runway 106 times, up 1.8-fold.

Noteworthy in April were the consecutive takeoffs by 10 or more carrier-borne aircraft. There were times when a formation composed of several planes did LPs and TGs before landing. This worsened the noise level. On April 23, a total of 51 landings or takeoffs by U.S. military, MSDF, and commercial planes was confirmed in one hour starting from around 11:45 a.m. This calculates to one usage about every 71 seconds. More than half of those, or 27, were by carrier-borne aircraft.

Since the completion of the transfer of carrier-borne aircraft at the end of March, noise is measured more frequently near the base. According to Iwakuni City, noise was measured 1,311 times in April in Ozu Town, which is south of the base. This is the highest monthly figure since May 2010 when the runway was relocated offshore.

Iwakuni City receives reports from the Chugoku-Shikoku Defense Bureau about the annual number of landings and takeoffs at the base, but the reports give approximate figures and do not give details of usage, including LPs and TGs.