The survey revealed that companies are moving forward by trial and error in their recruitment of new university graduates amid a “seller’s market” where students have an advantage.

In this context, companies changed their recruitment methods. Some 64 companies said they “introduced or expanded internships.”

In the past, Japan Business Federation (Keidanren) stipulated that internships were to be “five or more days.” Starting from the job-hunting activities of students who will join companies in the spring of 2019, however, Keidanren changed its policy to allow one-day internships, and it looks like this had a major impact on companies. Toyobo Corporate Officer Hiroshi Ohtsuki said, “We offer a full-fledged internship where students can experience sales and other operations firsthand.”

The next most frequently given response to the question about changes in recruitment methods was “increased number of corporate informational meetings,” with 36 companies giving this response. Some 25 companies said they introduced or increased their number of “recruiters,” who contact students from their alma maters and encourage them to apply to the company.  Some 25 companies said that they raised starting salaries. Masato Mizuno, president of Mizuno Corporation, said, “We increased starting salaries for all entry levels.”

Mizuho Financial Group held corporate informational meetings where students could ask questions to Group executives. Managing Executive Officer Hisashi Kikuchi spoke of why the Group did this: “The students can get a sense of how serious we are. We want those who are truly in sync with us to join.” 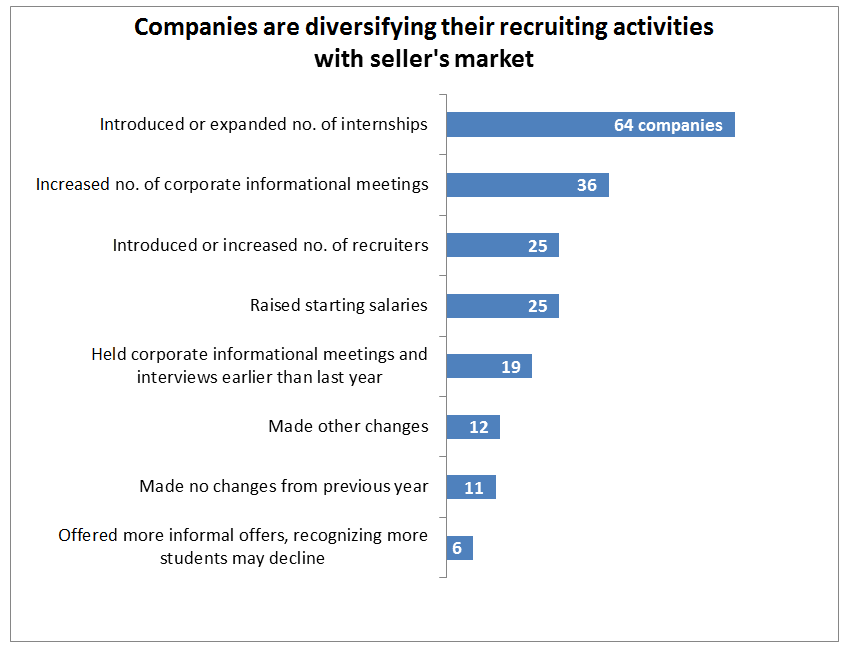 In its [recruitment] guidelines for member companies, Keidanren states that “corporate informational meetings are to be held from March 1 and screening activities, including interviews, are to start from June 1.” The guidelines are for member companies and are not legally binding. In the survey, 18 companies said that they held informational meetings and interviews prior to the Keidanren-prescribed start date.

Keidanren has initiated a review of its guidelines. Asked how Keidanren should revise the schedule, some 24 companies said Keidanren should move up the schedule for holding informational meetings and interviews. JTB Director Yuji Kato said, “If the schedule is moved up, students will be able to shorten the period of time they spend on job hunting.”

Some 22 companies said the schedule should be kept as it is. Many companies expressed concern over the burden on students and companies. Seibu Holdings President Takashi Goto commented, “Frequent schedule changes will cause confusion and interrupt students’ academic work.”

Some 16 companies suggested “not setting a date for starting recruiting activities.” Nitori Holdings President Toshiyuki Shirai commented: “Students’ job-hunting activities have diversified. The Keidanren guidelines are losing their meaning with the impact of non-member companies.”

Among those companies indicating “other,” some said Keidanren should increase the effectiveness of the guidelines. Ajinomoto President Takaaki Nishii said, “If Keidanren is going to issue guidelines, they need to make them more binding.”

[Polling methodology: The survey was conducted from May 28 to June 8, 2018, through interviews with top executives at 100 leading Japanese companies nationwide.] 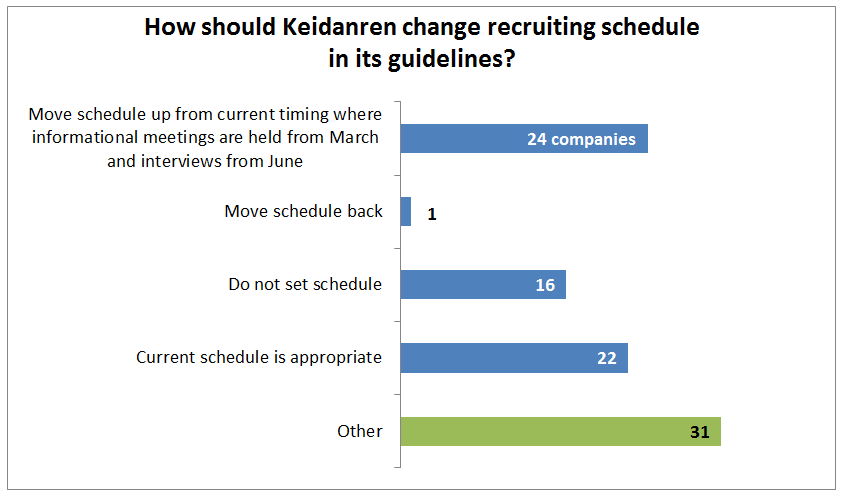