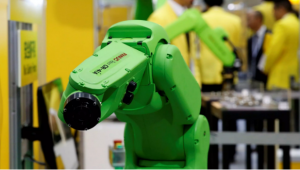 The need for quick funding has been met by such deep-pocketed companies as Fanuc, which has sought to acquire smaller robotics businesses. © Reuters

TOKYO — Japanese startups are increasingly choosing to sell themselves to large corporate groups rather than going through financial markets for capital, moving them closer to an American-style exit strategy.

Although 90% of startups in the U.S. are ultimately bought by bigger companies, initial public offerings have typically been the choice for young, unlisted Japanese businesses. Yet buyouts of startups look poised to outnumber new listings this year.

Acquisitions of unlisted companies in the five months through May jumped 30% on the year to 26, according to Recof, with most of the targets less than 10 years old. The figure, the largest for the period since the mergers and acquisitions advisory firm began collecting data in 2012, puts this year’s deals on track to surpass the 2017 total of 49. The value of these purchases came to 16.9 billion yen ($153 million) over the five-month period, up 150% from a year earlier.

Over the same period, 25 companies debuted on the stock market. Japan typically sees about 90 IPOs a year, with businesses less than a decade old accounting for around 40%.

Though IPOs are an effective way to raise capital, they typically take two years of preparation. At a time when technology is developing at a dizzying pace, fledgling businesses see a need to diversify their funding options. More are seeking to be acquired by deep-pocketed patron businesses, which can provide access to talent and global sales channels.

Such deals also benefit the buyers by expanding their business portfolios. The growing importance of technologies such as the “internet of things” and artificial intelligence is also encouraging more tie-ups between established companies and upstarts. Some businesses are even setting up their own venture capital funds.

The U.S. startup space has been widely criticized as a winner-takes-all market, with numerous promising companies absorbed by internet behemoths such as Google and Apple. A similar dynamic in China, with buying sprees by the likes of Alibaba Group Holding, has made many uneasy.

“Technology and customers tend to go to the big companies, which hinders competition over the medium to long term,” a player in the Chinese venture capital industry said.

But the American venture capital market is 50 times as large as Japan’s, which totals just 150 billion yen in annual investment. And while the U.S. and China each have 70 to 120 unicorns — unlisted companies valued at $1 billion or more — Japan has fewer than 10, even counting flea market app operator Mercari, which debuted Tuesday on the Tokyo Stock Exchange.