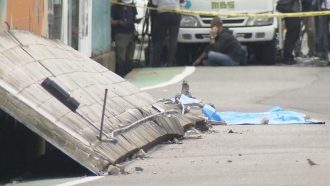 NHK’s “Close-up Gendai+” reported on the powerful earthquake that hit the Osaka region on Monday, which claimed the lives of five people. The program said many municipal functions were paralyzed in Osaka as transportation services and lifelines were disrupted. According to the program, people were trapped inside more than 160 elevators that stopped operating due to the earthquake. The program also reported on a girl who was killed in the quake after a concrete-block wall fell on her, saying that there are many similar walls across Japan.